By Exclaim! Staff
Published Dec 06, 2022
We've already shared our lists of the 50 best albums and 25 best songs of 2022 — but that barely scratches the surface of how many great Canadian albums came out in the past 12 months.

For listeners looking to dig a little deeper into Canada's bounty of albums released in 2022, we've rustled up our favourite Canadian records that might've flown under your radar this year. From the return of sorely missed local heroes to fresh starts from familiar faces and a number of head-turning debuts, here are 25 great Canadian albums you might have missed in 2022.

A decade since Apollo Ghosts' last proper album, the Vancouver group make up for lost time with this sprawling double album. "He got more experimental / As he aged, less sentimental / Normally things don't work out this way," reflects frontman Adrian Teacher on "Peace Motive" — who definitely isn't singing about himself, since he's sweetly heartfelt on both the acoustic ballads of the first LP and the jangle-punk bops of the second.
Alex Hudson

Quinton Barnes
For the Love of Drugs
(Grimalkin)

Quinton Barnes knows himself so well that when it came time to follow up last year's breakout As a Motherfucker, the multi-hyphenate scrapped all but one song from an entire first version of Drugs purely to dial up the aggression. Through all the audacious genre-blending to meet such standards, Barnes remains an exceptional vocal stylist, commanding attention whether leaning into R&B rapture or razor-sharp rap missives. A journey of self-guided ruination has seldom felt (or sounded) this good.
Calum Slingerland

In a year where mid-2000s pop-punk became an omnipresent touchpoint for stars old and new, Montreal's Sophia Bel proved the genre needn't be just a stagnant nostalgia trip. On Anxious Avoidant, she reaches back to her teen years to write a classic pop-punk coming-of-age tale. Yet the record is more adjacent than beholden to the current zeitgeist, bending pop-punk tropes as well as folk, alt-rock and electronic music to her own needs.
Ian Gormely

Cola
Deep in View
(Next Door)

Working in the long, wiggly shadow cast by Ought, Tim Darcy and Ben Stidworthy rise to the occasion on their sterling debut as Cola, rearranging those sidelong pieces into sharper and more prickly shapes with the help of drummer Evan Cartwright. Burning off any residual grandeur and leaning into thrumming abstraction, Deep in View is emotionally resonant post-punk with genuine personality — and it proves that Darcy and Stidworthy's flinty alchemy remains as singular as ever.
Kaelen Bell

Dumb's iteration of witty post-punk is as quick as their songs' typical runtime. Pray 4 Tomorrow engages late capitalism in conjunction with bandleader Franco Rossino's listlessness, straddling the line between disengagement and unease. This flirtationship with politics further links the Vancouverites to genre mainstays like Gang of Four and Parquet Courts — while still deviating from the angular punch of their contemporaries.
Sydney Brasil

As prolific a 2022 as each of them has had, this collaborative tape from Toronto's Bakers Club boss, Montreal's supreme sampler and their guest sous-chefs is as delectable as the St-Viateur "bagels from God" captured on its cover. Like a reaction between baking ingredients, there's a clear chemistry in what the pair have cheffed up, as Fresco mills his marvellous wordplay to blend with Craven's crisply chopped, buttery samples. Like a fresh dozen, it's a pleasure watching their rise.
Calum Slingerland

It was never practice — Alice Glass was always the creative genius behind Crystal Castles. That much is evidenced by her industrial-hyperpop-indebted debut solo album, PREY//IV, which finds the artist clawing her musical identity back from her allegedly abusive former co-conspirator, infusing her work with violence and vengeance for an ultimately danceable exercise in darkness.
Allie Gregory

Saya Gray reveals herself as a touring bassist for the likes of Daniel Caesar in the way her debut album dwells in frequency rather than narrative. There's an inherent transience and an unsettling, spectral quality to how its prismatic textures flit back and forth between wide-ranging genres; from loping jazz on "EMPATHY 4 BETHANY" to the skittering avant-pop of "SAVING GRACE" to wayfaring country twang on "LITTLE PALM." You hold 19 MASTERS with petroleum jelly hands, its revelations largely slipping through undetected even with repeated listens — like cavities between your cheeks too clever to let a toothache give them away.
Megan LaPierre

Richard Inman
Come Back Through
(Independent)

Like any great heart-worn country songwriter, Richard Inman knows the value of an honest story. On Come Back Through, his straightforward lyrics speak universal truths as he maneuvers through country music archetypes and romantic parables. In "Kings on the Corner," Inman reveals the reality of life's bitter loneliness over a game of cards: "Another shot of whisky helps us through December / And her dark eyes flicker in my mind as we deal another round."
Myles Tiessen

Jasmyn
In the Wild
(Royal Mountain)

Even without synesthesia, In the Wild is a Technicolor experience. Bookended by the bombastic vamps of "Green Nature" and low-end frequency ping-pong on "Purple Reflection," the uplifting debut solo LP from the ex-Weaves bandleader sees Jasmyn Burke burst forth, propelled by breezy, idiosyncratic dance pop to bloom anew in the freedom of reconvening with the natural world. With healing through movement as the guiding principle, Burke proves herself to still be an essential voice — on her own terms.
Megan LaPierre

Few artists in the Quebec music scene share Lydia Képinski's sense of drama and flair for the epic. For her second album, the Montreal singer-songwriter opted for an almost EDM-driven sound, privileging uptempo songs with hard beats. The fact that she did so without losing any of her theatricality is particularly impressive. Her dark, mythology-inspired poetry reaches new heights on the title track, while "Vaslaw" is simply one of the most powerful pop songs of the year.
Bruno Coulombe

After years of leading the pack in the Quebec rap scene, Loud decides to go back to his rapping roots and share his personal journey on the excellent Aucune promesse. By lowering the braggadocious dose and cranking up the nostalgia, Loud effortlessly layers his complex wordplay and imagery over uncanny production. Vivid imagery and authentic social commentary meld in this incandescent project that will certainly curtail naysayers and convert purists in one fell swoop.
Antoine-Samuel Mauffette Alavo

Toronto songwriter Hannah Bussiere Kim has been releasing slinky, feathery dream pop for a few years now, and debut album Duality is her most fully realized work yet, refining the multi-instrumental prowess witnessed in her viral jam videos. Guest appearances from Jay Som and beabadoobee are notable cosigns for the fast-rising artist.
Alex Hudson

Playful flirtations and knowing nods define TOPS member Marta Cikojevic's solo foray. With a keen sense for pop writing, she brings together '70s R&B and contemporary indie to create something seductive and bright. Marci finds confidence in uncertainty — even flourishes in it — resulting in a shimmering debut that keeps its influences close and its attitude closer.
Sydney Brasil

Retaking the reigns with the first Mares of Thrace album since 2012, vocalist-guitarist Thérèse Lanz hasn't lost a step on The Exile. Joined by drummer Casey Rogers (who also produced and engineered), Lanz stakes out greater musical territory through a balance of extremes, quieting her scraping growl in favour of melodious leads and layers, and occasionally ceding space to cleanly picked guitar passages amidst bludgeoning riffs. If this is indeed the last ride for Mares, one shouldn't hesitate to saddle up.
Calum Slingerland

Eliza Niemi's mesmerizing debut full-length feels conjured, as if she's pulling threads of light from thin air. Built from sun-bleached spirals of guitar, warped electronic pulses and raspy cello, Staying Mellow Blows's whip-smart writing and understated arrangements — running the gamut from bouncing country to opalescent R&B and creaking folk — draw blood despite their quietude. All collapsing crystals of salt and delicate skeletons, Staying Mellow Blows is one of the most intelligent and emotionally affecting records of the year; nothing else moves quite like it.
Kaelen Bell

Though there's irony in Jahmal Padmore breaking down his ego just in time for his solo debut, his authenticity pays off. The songwriter, producer and drummer takes bits and pieces from each of his past projects, bringing phaser and chorus pedal-heavy guitars to his take on post-Afropunk R&B. Through its exploration of amour propre through romance and self-love, Esparonto is refreshingly honest and daring.
Sydney Brasil

Released on her own label SSURROUNDSS, Tess Roby's sophomore album feels imbued with the majesty of an ancient knowledge. By focussing on the enduring wisdom of spaces and what hangs in their cobwebs, she carries its heft with an unmistakable lightness, wrapping her philosophical theses in the visceral repetition of gossamer synthscapes and quavering vocal stacks. "Do you recognize yourself in this moment?" Roby asks, cracking the spine of starry opener "Century" — closing the distance between tenses before inviting the chasm to unfurl.
Megan LaPierre

Formed by twin sisters Phoenix and Mercedes Arn-Horn, Ontario siblings Softcult explore the nostalgic reverie of '90s grunge and shoegaze and shine them up for their own purposes. Across their six-track, all-hits-no-skips Year of the Snake, cuts like "BWBB" and "Gaslight" fuse moody melodies with lush instrumentals and fierce feminist lyricism, while the shimmering "Perfect Blue" expands their self-described "music for mall goths" sound into pedal-powered bliss.
Owen Morawitz

Cadastral Maps' Midwest-via-Maritimes emo is a luminous ball of imagination, striving against a coastal fog of blown-out fuzz. But rather than obscure Tin-ear's joyous rush — Helaina Lalande's glittering melodies winding around jazzy signatures and sturdy knots of guitar — that wall of distortion only draws you closer, asking that you lean into the grey for the blinding glimpses of light; mighty beasts, fantastical heartbreak and great ocean voyages await.
Kaelen Bell

Love is at the core of TRP.P's personal and professional union, and its ups and downs are reflected in Mirror Soul. Much like the ease of its titular compact, the Toronto duo's full-length debut is an effortless blend of soul and rap, rife with exquisite harmony, inviting production and deeply felt songwriting. Recent news of a hiatus will have us gazing a little longer at the potency in sound and spirit that could only come from two in such a partnership.
Calum Slingerland

Yoo Doo Right
A Murmur, Boundless to the East
(Mothland)

Five songs and 45 minutes long, Montreal experimental post-rockers Yoo Doo Right's sophomore LP shamelessly indulges in excess. From its eight-minute opener "Say Less, Do More" — a method to which they adhere throughout — to 16-minute closer "Feet Together, Face Up, on the Front Lawn," the trio lean into their repetitive impulses, steering endless loops of sound crashing through their own mantric filters while avoiding theatrics and superfluous crescendos tactically.
Allie Gregory 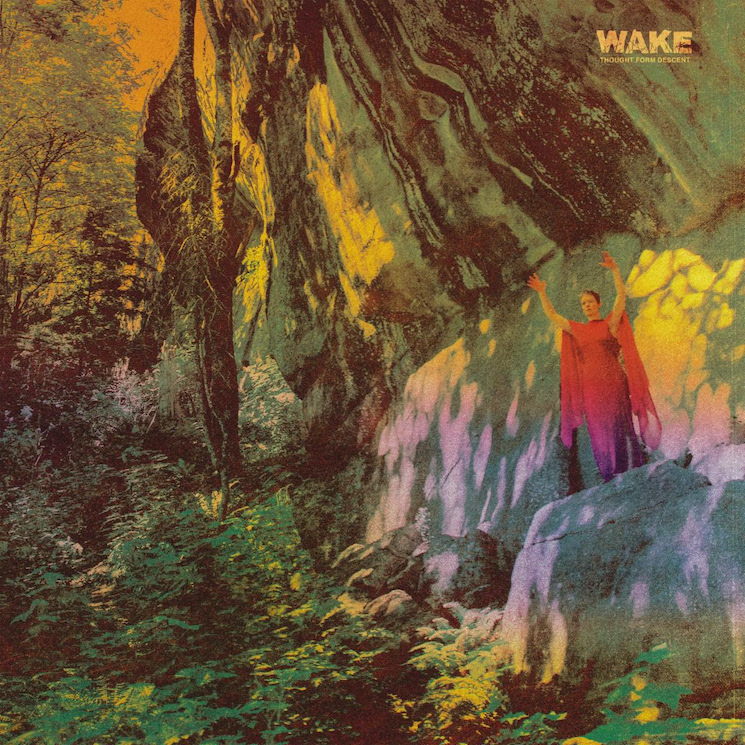 Calgary-bred formerly grindcore five-piece WAKE continue their evolution on Thought Form Descent, blending elements of black metal, post-rock, shoegaze and hardcore so harmoniously that the final product becomes at once sublime and atmospheric. The album has something for (almost) anyone; fans will savour the band's post-metal and blackgaze experimentation, while non-metalheads will find the album's melodic interludes filling a Sunbather-shaped hole in their hearts.
Allie Gregory

Weary's Kate Lahey crafts the kind of sturdy, emotionally resonant indie rock that, when done right, eclipses all the milquetoast pablum that crowds the genre. Simple, trusty sounds — damp piano, burnished guitars and unflashy percussion — are brought vividly to life by Lahey's bruising songwriting and rich, unstudied voice. From the coppery sway of opener "Scraped Knee" to the organ-driven hum of "Order," there are entire worlds hidden in the shadows of Hush.
Kaelen Bell